The intention of this article is to put into perspective some of the recent hype, and associated reactive hostility, concerning the rise of bitcoin and the impact it is going to have on the lives of FX professionals.  More importantly, it will seek to set out the possibilities that now exist with the creation of autonomous decentralized networks to totally redefine the way society as a whole is going to operate – both socially and financially – in the next couple of decades.

There is still a common misconception in some quarters, not helped by inaccurate and uninformed journalism, that bitcoin is just a classic asset bubble, destined to burst and collapse soon.  Most of these predictions have been based on the traditional market analysis of price movement charts and buy-sell order book patterns, which assume that bitcoin is simply just another tradable commodity, albeit with a monetary overlay.

It is certainly true that, at this moment in its lifespan, there is considerable volatility in the price of bitcoins. You need however to remember that the bitcoin network has been in existence for less than five years, and is nowhere near its full maturity. The ‘price’ of a bitcoin often shows quite rapid daily swings of upwards of 10%, and more recently an underlying decline showing a 30% fall through September that has now been largely reversed. These fluctuations will naturally ring alarm bells to most FX traders as being speculative at best, and at worst being something without any tangible definable value.  But bitcoin is not ‘traditional’, it is unique as nothing like it has ever existed before and it cannot therefore be satisfactorily compared to any previous financial models or time-acquired experience. “Wise Old Heads” are often looking the wrong way when it comes to new emergent technologies.

So, a classic market-analysis approach to bitcoin fundamentally overlooks the revolutionary protocol of the Blockchain Open Public Ledger Network on which bitcoins travel and thus derive their value.  Bitcoins are not just simple commodities that one party owns/manufactures and then offers to the market as an isolated transaction to establish its value. The reality is more akin to a “living entity”, an autonomous decentralized body in which each bitcoin is individual, but bound together by a mathematical formula with all the other entities on the network.  Each bitcoin in effect coveys programmable messages (which can be both financial, contractual and social) and this is where the unique value of bitcoin is to be found.

Andrea Antonopoulos, one of the leading figures in the bitcoin community, has compared the working of the bitcoin Blockchain network to those massive complex ant colonies, often with upwards of 300 million ants. Each individual ant is a simple organism without the ability, vision or intelligence to construct the colony on its own, but each is ‘programed genetically’ to function as part of the whole eco-system. There is no “leader’ directing operations, no ‘overall plan’ (no Central Reserve Bankers!), but the colony gets built and functions perfectly – because of the inter-locking coding within the individual entities themselves. There is not space here to fully describe the real revolutionary nature of the bitcoin white paper, but anyone who wants to fully understand how bitcoins really work should seek it out and read it for themselves.

The world is ready for Bitcoin

Acceptance that bitcoin is creating a completely new eco-space is gaining traction very rapidly.  Within the past month, several leading mainstream business figures and institutions have made encouraging comments about bitcoin and Blockchain related technologies. Bill Gates told nearly 1,000 senior bankers at SIBOS2014 in early October that digital ledger Blockchain technology was going to take away ‘bread and butter’ revenues from excessive charging for a service that could now be made almost frictionless and at minimal cost. If banks don’t adapt to the new technology they will lose out he told them.  And in September the Bank of England issued a Q3 report on bitcoin and digital currencies which concluded with the following statement.

“The distributed ledger is a genuine technological innovation that demonstrates that digital records can be held securely without any central authority”.

For a Central Bank to conclude that a central authority or intermediary is not required to validate digital records is indeed revolutionary. In the financial world today the implications for the tens of thousands of auditors, compliance officers and ledger keepers is profound. But this innovation is far more revolutionary than something that will merely challenge traditional record keeping industries. 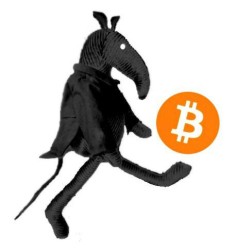 Bitcoin Rat
The Bitcoin Rat is one of the most active members of the bitcoin twitter community. His background is as a retired professional practitioner in Architecture and the Graphic Design fields and he has been involved in bitcoin since mid 2012 with a small personal investment.Being much older than most in the bitcoin environment ( having hitchhiked around Europe with an old guitar in the late 60's and lived in the Matala Caves hippy community on Crete in the Summer of 1969) The Bitcoin Rat has been said by some to possess 'a young head on very old shoulders'.